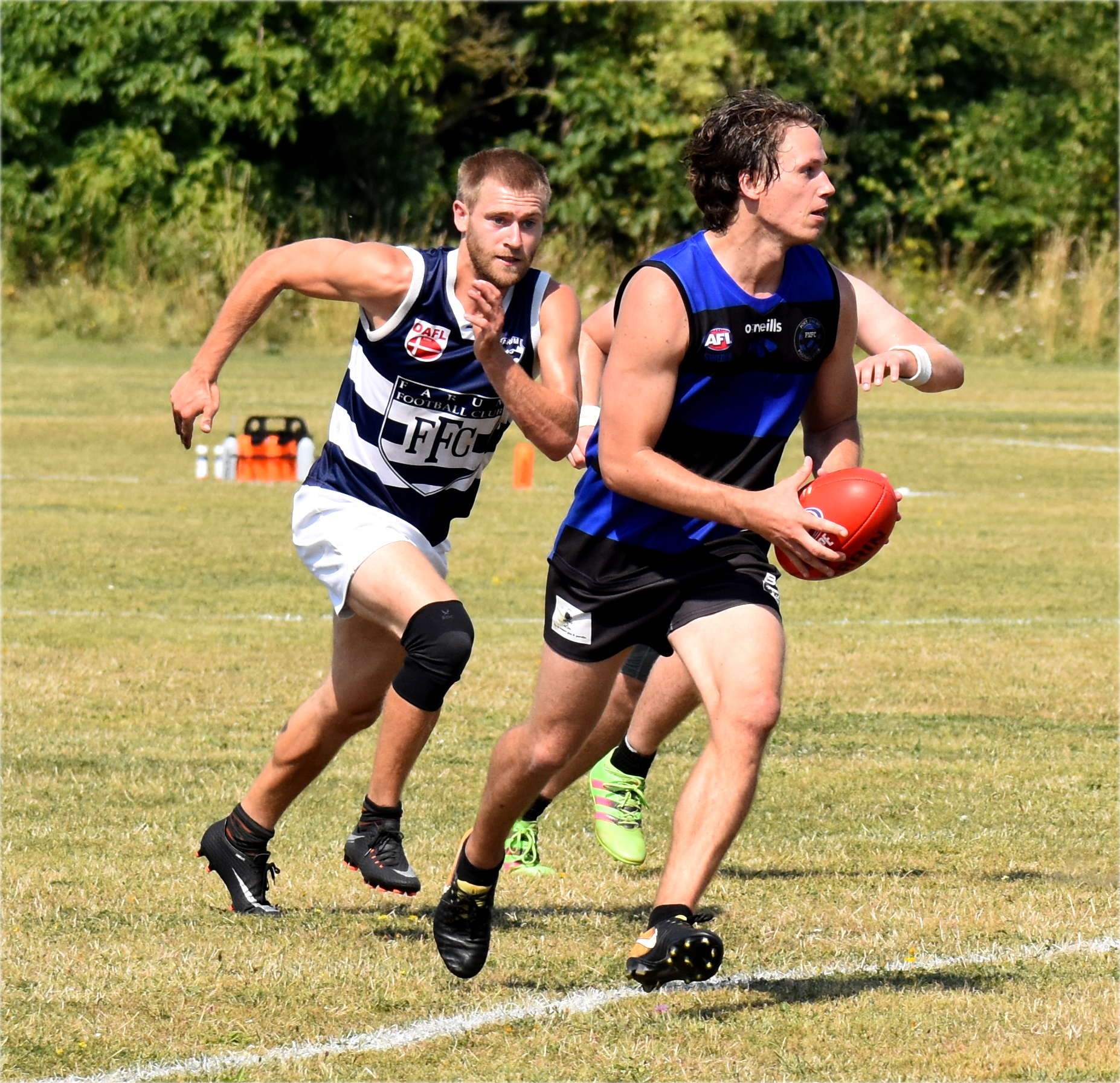 Finally! After months and months of training, the Maulers were set to play their first match of the year against last years premiers. It was always going to be tough going against such an experienced side with 7 of our top players out, but turning up to the game with 18 players was a huge plus. The depth of the club is second to none.

With temperatures nudging 30 degrees both teams knew there were going to be a few kilos in fluid lost throughout the day.

The game started in the worst possible way with a clearance and goal from perhaps the best player in the league Mikkel Kjøge, who was going to be hard to stop all day. This pattern continued for much of the first quarter and if not for Gates down back the score could have been a lot worse. When the Maulers did get the ball they were able to move it cleanly at times, however it was hard getting past a very good midfield and solid backline. Hard knocks to Stretch and Nauris, showed the boys that DAFL is 5 or 6 levels of intensity above the SSAFL. Bazza, Toby, and Diesel provided some spark off the bench and provided some shots on goal, while Chris worked himself into the game, and was able to slow the bleeding in the midfield.

The second quarter wasn’t too different to the first, however the Maulers were able to get on the score board. However, being second to the ball was a common theme in the second quarter and needed to be addressed at half time. Stretch stepped up in the ruck and started with some big 2nd efforts giving us another midfielder, and Paul and Nauris were beating their men down back. Diesel, the sponge, once again brought some spark to the game and made the most of his minutes, putting himself into smart positions and creating opportunities.

The third quarter is when the game really started for the Maulers. A huge burst of 4 goals to 1 in the first 10mins gave something for the fans to cheer about, as our killer B forward line started getting quality shots on goal. Chris was winning every centre clearance with the help of Stretches ruck work, while Mick on debut took on a more defensive role and helped quieten a very good Farum midfield. The Maulers eventually won this quarter and if not for some uncharacteristic misses it could have been even prettier on the scoreboard for the local lads.

The last quarter was a much more even contest, but alas it was too late. Chris was a beast in the midfield hitting the ball, and body as hard as anyone and showing the younger guys what is expected. Stretch was a continuous source of inspiration going up and getting knocked all day and fighting on. Gates turned back the clock holding the best forward in the league to 4 goals, when any other defender would have given up 10, such was the delivery he was getting from the midfield. Diesel was huge in the minutes he got, and showed how to play when coming off the bench, making the most of his chances, and scoring himself a well deserved goal. Malin was the first female to play for the Maulers (and maybe the DAFL) beating her opponent all day. Tobias also gave plenty off the bench and picked up the pace of the game quickly while Benny lead hard all day.

The scoreboard was not pretty for the Maulers but they continued to fight and give fans something to look forward to. With 7 quality players still to come into the team it is going to be tough at the selection table for the leadership group. Well done to Hamza, Mick, and Malin for making their debut, they all carried themselves in a proud fashion.

A huge shout out to Hamza, Ben, Danny, Crash, Stretch and Diesel for helping out before the game in setting up the shed, and field, as well as Casey, Daphny, Matty C, Eddie, and Zane for helping with BBQ, goal umpiring, time keeping and so on. The club doesn’t run without these people, and we can’t thank you enough for helping out. The last thank you needs to go to Ross and Matt for their umpiring on the day. They were wonderful, fair and it was hard to find a decision they missed all day.

The Maulers may not have had the best day but the football club as a whole had a wonderful day putting on a great show and well run event.