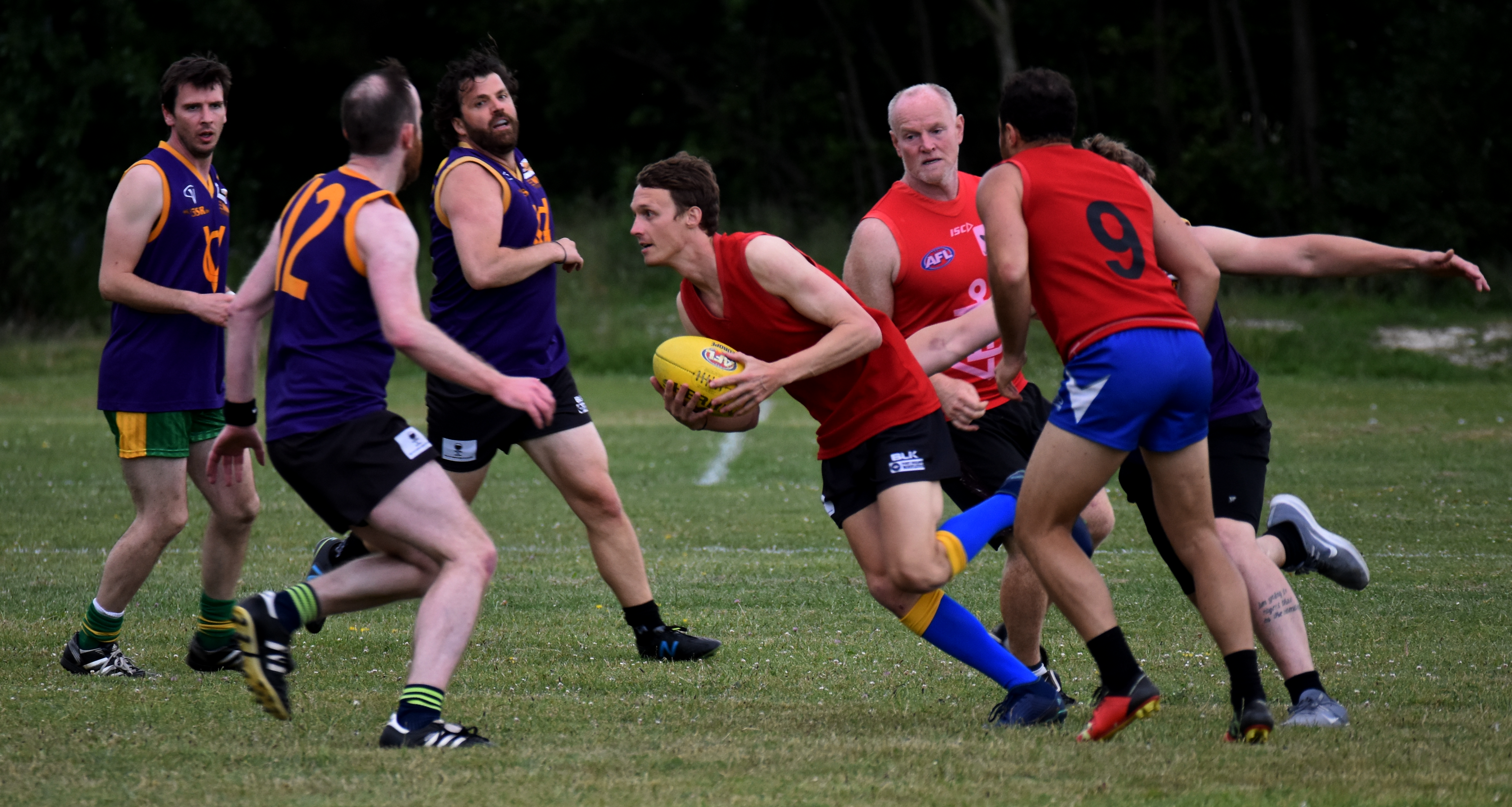 Thursday the 18th of June saw the first round of the new and improved version of the South Sweden Australian Football League.

With the live draft the weekend before there was much anticipation leading into Round 1. New rules had been created with only the girls having access inside the 30m arc allowing them to move around in freedom or stress of running into uncontrolled new players and those suffering from white line fever.

The first game, between the new look Celtic Convicts and the Red Eyes, was a great way to set off the competition. The Convicts led by Bazza as the general manager, and Izzy and Donny as captain/coaches, also had a lot of new faces including Dan O’Brien, Flor O’Sullivan, and Paul McEvoy. Also current Mauler players Diesel and Matty C aided by returning legends Denis, Adam Jennings and Beven Dunne. Young Lynx stars Siri and Rowdy Rebecca were playing their first game and were excited at the prospect. The Red Eyes are a strong team of paper with Ben Polmear managing to sneak some quality players into his line up. The Red Eyes were a mixed bag of talent, experience and sanity. Boasting BnF winners in Tim, Paul (out inj), new gun Marc, the best player in Osby, Wayne and Lynx captain Sammy meant they were always going to be tough to beat. Maulers all-time leading goal kicker Mad Matt was shocked to learn he would have to kick the ball over 30m a half if he wanted to score, however rules are rules, even for royalty. Danny helped bring up the average age of the team while youngsters Chuck, Eddie and Co-captain Mega, brought youth and enthusiasm to the team. First gamer Hammer was ready to prove himself after a number of trainings, and Gates was planning on getting some more kicks up the ground.

The weather held off the first game and it was obvious from the outset that the Irish had come to play. The attack on the ball by the Convicts set the standard for the evening with some big bumps and tackles being laid. The Red Eyes were class though and were able to move the ball well throughout. Ben’s tactic of not showering the week before the game worked well as no one from the Convicts seemed to want to go near him. He found himself in paddocks of space and managed to score a couple of goals to keep Mad Matt quiet for a little while. Mick “Peaches” Lynch for the Convicts enjoyed kicking over everyones head and managed to score, while big Diesel had to jump on the phone after the game to give mum a call after belting a set shot over a sledging Benny’s curly hair. Sammy scored a gem for the Red Eyes, and specialist backman Beven proved he should have stayed back there missing one he should have gotten. In the end the Red Eyes class was too much for the Convicts, however there is no doubt there was improvement from the new boys throughout the game and next time they meet it should be close.

Game 2 saw the Greater Southern Sweden Giants let by Kat, take on the Celtic Convicts. The GSS Giants included mostly Swedish players helped out by the likes of Stretch and 2019 DAFL leading goal kicker Brodie. The Giants also boasted three time BnF winner Chris as well and legend of AFL Sweden and multiple Helsingborg Saints BnF winner Andy Svensson.  Stacked with talent from the Lynx team including superstar Malin and goal sneak Maddy to help out General Manager Kat. Crash, Toby, Måns and old hand Freddie brought some depth to the Giants line up. The Convicts however, already being warmed up jumped out of the gates with goal sneak Peaches Lynch bombing in a few early goals to create some freedom for the Convicts. Kat and Chris got the Giants on the board with some great goals, however when Beven Dunne is kicking goals you know it’s not your day. Stretch worked tirelessly in the ruck and on the ground for the Giants, while Donny and Matty C were in everything all day for the Convicts. Izzy adapted to the new rules well and found herself a goal, while Siri took a huge mark down back for the Convicts while Rebecca showed she loved the rough stuff tackling all day. Malin led well for the Giants however couldn’t find enough of the ball as the rain came down. In the end the clinical goal kicking and hot start meant the Convicts got their first win of the evening.

Game 3 was between the Red Eyes and Giants. The rain was really coming down now and led to some tough footy. The referees were feeling the pressure too finding the whistle that some might suggest a little too much as the game went on 😉 With plenty of feedback being given the rain did little to cool the temperatures of the hotly contested final match. With the weather coming down it was the girls that stepped up with four of the seven goals being kicked by the Lynx. Kat continued her good form with two goals, while Mai got on the end of a clearance from her lover Marc to get on the board. Megan helped with another six points bombing a long one for her team. Chris worked hard all day against a good midfield and got a well earned goal as a result. Brodie up forward led well when he had the chance, however kicking in the wet meant a lot of leads went unrewarded. Matt managed to take a mark on a first gamer and then played on for the easiest of goals. The post-goal celebration took a lot more effort and you would have thought he won the grand final with such a reaction. Wayne kicked a bomb or a torpedo from well inside the centre square and made sure everyone was watching. In the end the final game was a cracker coming down to the wire with just one straight kick in it.

It was a great result by all those involved especially the three general managers who organised the teams and games. Danny, as always, was massive in organising food and refreshments and it was a fantastic day for the club in general despite the weather. Round 2 will hopefully be a Friday night classic in Helsingborg on the 10th of July.

See you all there!